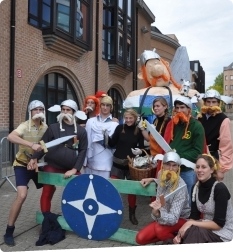 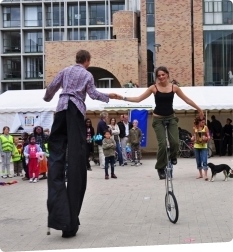 What’s going on in Ottignies-Louvain-la-Neuve!?

The numerous cultural events and parties are a part of the day-to-day for residents..  The list of events is long and student social life  has a significant role in the social and cultural life of the city.

To list a few, the main events that take place each year in Louvain-la-Neuve are, among others:

The “Welcome Spring Festival” music festival at the beginning of April
“Ebullition” a summer woods game festival, at the end of the academic year
The “Summer Festival” and the beach from the end of July to the beginning of August
The “24 hour bike ride”  which generally begins around the 3rd Wednesday of October

The following take place in Ottignies:

“African Night” in June in the Woods of Dreams
The “Festivals of Wallonia” organized on the 3rd weekend of September in commemoration of the days from September 1830.
The “Apple Festival” at the end of October in Céroux
The ”Halloween Festival”, October 30th starting at 6:30 pm in the  Woods of Dreams park.


A national and international impact confers to this annual event an incontrovertible presence in the agenda of all students and Belgian citizens.

What is the 24 hour bike ride?

In October 1976, the Student Sports Center (SSC) came up with an idea  to offer a new and original event that gathers students, UCL members and residents of the entity.
The 24 hour Bike Ride was born, a cyclist team relay race unlike any other, which consists in making the most laps possible in a marked course in the city, for 24 hours without interruption.

More than a race, a real celebration !

Fun, team spirit and solidarity prevail over the spirit of the competition.  The festival has increasesd little by little with the organization of various activities, a secondary race for children (240 minutes), concerts and dancing parties.

The CSE has created a tradition so as to not alter the event by creating categories: the participants, mostly Belgian but also foreign students, choose to defend their chances in a traditional race, by creating an original traditional bike or by defending a humanitarian project.

Open to all, the 24 hour bike ride is unique blend between sports tradition and centenary tradition of student events.

But the folklore of Ottignies-Louvain-la-Neuve doesn’t resume only at events.  The giants and folklore groups perpetuate the tradition and the memory of stories and legends of the city.

In 1987 the idea to create a giant of the district was created.  The brick worker was born.  This was the first giant Ottignies.  The brick worker reminds the population of the former existence of a brickworks factory in the Bon-Air section of Céroux-Mousty. In 1988, Jean-Joseph received a companion: Charlotte.
On August, 15, 2007, Jean-Joseph married Mélie Dèl Crwe.

Claims to be the identity symbol found in a friendly district, the Croix district.

The first name François is in reality that of a specific leader of the squadron commander of the 11th zouaves during the May 1940 conflict that occurred by the Dyle bridge.

The Vîs T’Chapias is a group of dancers that carries on dances of the past.  They also preserve the costumes of the period and the polka, mazurka and of course the famous Lancer square dance. They also perform Belgian folklore dances (maclotte, passe-pied, and other square dances).