Home » The City and its University » University Town » Urban Projects 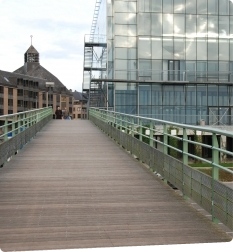 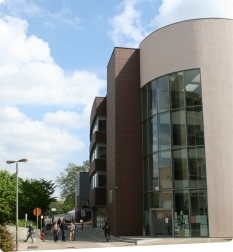 From the conception of Louvain-la-Neuve, its planners anticipated the needs and challenges of tomorrow.

By creating a flexible city, new projects have been, and continue to be, completed seamlessly.  The city, in fact, is constantly under necessary, but welcome, urban development !

The building of the esplanade Mall in 2005 changed the face of Louvain-la-Neuve and redynamized the town center, a true call for investors that no longer hesitate to flock to the city.

•   An extension of the center was realised between the Grand-Place en the Hergé Museum.  300 student dwellings are already build and the building houses the new Polyclinic Louvain-la-Neuve, a collaboration between clinical Saint-Pierre and Saint-Luc. A new building project of 150 apartments and 40 studios will cover the center ring up to the Source Garden.  These two blocks are separated by the new street, Rue du Traité de Rome, a direct access to the Hergé Museum via the footbridge.

•   A new municipal branch with the new police station is now opened along the length of Voie des Hennuyers, halfway between the districts of Baraque and Biéreau. The building is energy efficient and comprise over 1,100 m² and 3 levels. The Police Station of Ottignies does not have sufficient premises for the operations that it must conduct for Louvain-la-Neuve so this building was the opportunity to move in. It also houses population services and the civil state offices of the CPAS and possibly City-Planning.

•   Alongside this new municipal offices was built the new Youth House. So long expected, the black cube of 300m ² include a reception area, a multipurpose room and space for all creative and musical activities organized by the animators of Chez Zelle. The inauguration took place the 17th of May 2014.

• A new university museum was launched in the current Library of Sciences and Technology's in november 2017, an emblematic building of the university and the city. The new Museum L being cramped in its ancient location, it was imperative to plan a new settlement. An ingenious project that promote the animation uptown, in addition with the restoration of the area. The museum is developping the link between arts and sciences and between the historic and the current center of the city

•   The pedestrian center is being extended to above the center ring between the Aula Magna and the Rampe du Val.  The project includes  a three-star hotel, a residence and service center for seniors and three small apartment buildings.

•   A new theater between the current Jean Vilar and Rue Rabelais is a community projects initiated with the University (UCL).  The theater is located on the narrow Rue du Sablon.  Because of this, the plan is to increase the center above the Sablon parking lot for this building.

•   An extension is planned for the mall's L'esplanade. The french society Klépière (owner) and Devimo (manager) signed an agreement with a common desire to enlarge L'esplanade. Devimo will be responsible for the management of the extension if it is built. Not yet building permits, or intended location and specific project. It will therefore have to wait until we know more !

A bet for the future

•   The RER parking lot with 2300 spaces will be completed close to Nationale 4, coupled with a 900 spot resident parking lot, with the view of creating an eco-district above it.  This new district will have housing, offices and shops with a total ground surface area of 56 000 m². 500 apartments and student accomodations are planned. 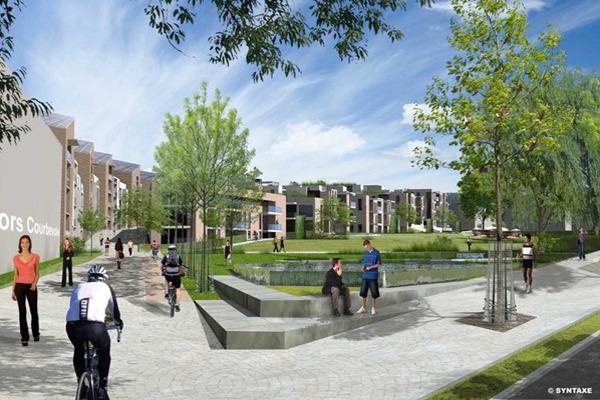