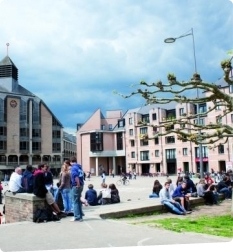 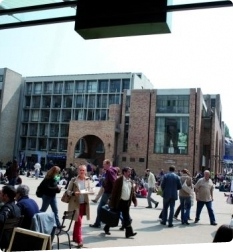 The university town of Louvain-la-Neuve is an urban project initiated by the Catholic University of Louvain at the end of the sixties, following the move of the Francophone section of the Catholic University of Louvain, originally located in Leuven.  The placing of the first brick by the King Baudouin on February 2, 1971 marked the moment that the Louvain-la-Neuve project became a reality.  At the same time, UCL created the Woluwe campus for its medical school and an important university hospital.

From the beginning of the seventies, the meadows, woods and fields of the Lauzelle plateau left a place for a true university town.
The university buildings are dispersed throughout the site to promote contact between the different users of the urban center.  Shops, businesses, administrative premises and housing are mixed together with academic buildings.  The districts, mainly residential, are quickly accessible on foot.


Watch the introductory film on Louvain-la-Neuve

Confusion between Louvain/Leuven and Louvain-la-Neuve: discover the little film made by and international student (8 minutes)

Founded in 1425 in Louvain (Leuven), the UCL is one of the oldest universities in the world, like Oxford, Paris, Coimbra, Salamanca, Bologna or Heifelberg.  Celebrities have attended and taught there, including Erasme, Mercator, Vésale, etc.

In the 20th century, important people like Georges Lemaître, author of the Big Bang theory, and Christian de Duve, Nobel Prize winner in medicine, taught at the university.


Present on 7 sites in Brussels and Wallonia, the actual UCLouvain is the first French-speaking university in Belgium and the second-largest complete french-language university in the world according to international rankings. Every year she graduates one out of two university students in French-speaking Belgium. The UCLouvain proposes a wide range of courses and research programs organised in 14 faculties and 22 research institutes and split in three sectors : social sciences, science and technology, and health science.
A true multiple community and open to the world, the UCLouvain welcomes in 2018-2019 nearly 31,000 students including 20% international students, 1900 teachers, 1900 staff members and 3000 researchers, 30% of whom are international researchers. Louvain-la-Neuve welcomes more than 20,500 students - as against 641 during the first academic year in 1972 - and 4000 adults in continuing education. The other campuses host 7007 students in Brussels Woluwe, 550 in Brussels Saint-Gilles, 1000 in Mons, 462 in Tournai and 182 in Charleroi). The UCLouvain has no less than 160,000 graduates of 123 different nationalities.