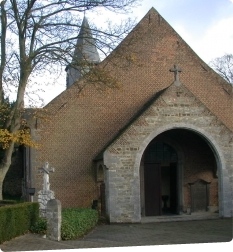 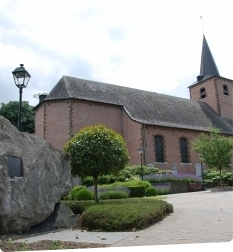 Our Lady of Mousty Church

The Our Lady of Mousty Church is one of the oldest, if not the oldest, church in the region.
The plan of the church is intriguing because it has monastic sanctuaries while a monastery never seems to have existed in Mousty.

The crypt of the church crosses under the choir and serves as a place of relic veneration for pilgrims and the sick.
The church and the crypt have been classified since 1952.

The parish house extends to the left of the vicarage.  Without any particular charm, this building originally served as a post relay then as a police station as of the end of the 19th century.

With a classic style, the current Saint-Remi church was built in 1785, replacing an older church that had been devastated by a fire in 1726. A calamity for the residents, the fire also took the presbytery and all of the archives.

The sanctuary was surrounded by a traditional parish enclosure until 1905.  The square of the church was thus christened “Church Square” by  the residents, without worrying about giving the space an official name,

In 1972, with the return of the students to UCL in Louvain-la-Neuve, the inside of the nave was entirely restored under the direction of Professor Raymond Lemaire.

Currently, the rectory can be admired, a remarkable building with gravestones leaning against the outside walls of the building.  The church and rectory have been listed since 1952.