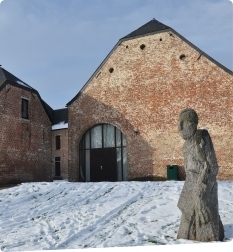 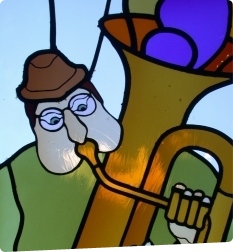 The Douaire Farm is located at the far end of the former municipality of Ottignies, along the provincial road, halfway between the churche of Ottignies and the church of Mousty.

The farm is a typical 18th century Brabant construction.  It is made up of a L-shaped house structure, a barn dating back to the 18th century, cow houses, and barns with saddleback tile barns.  The buildings were constructed around an interior enclosed courtyard.

This farm was the largest in the community during the 19th century, but was abandoned from 1962 to 1971, the year in which it was purchased by the City for restoration.  Led by Raymond Lemaire, the project started during the eighties.

The walls, roofing and rider arches are listed and the building was entirely reconstructed.  Since 1989, the library, games library and several cultural associations have been located here.  The Cultural Center is in the barn to accommodate exhibitions, shows, concerts and conferences.

Two works of art recently completed this cultural place : a decorative glass window in the barn door and a sculpture that stands at the border of the Chemin de la Grange since 1993.