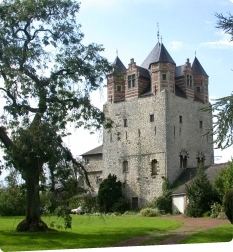 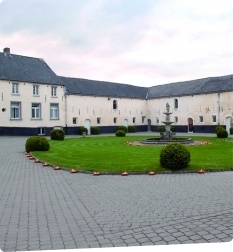 The Moriensart Tower gives vsistors a glimpse of what could have been cerca the middle of the 13th century, a fortified house built within the Duchy of Brabant to resist invasions.

The name of 'Moriensart' comes from the name “Moreau”, a knight of Limal in 1237, who built a defensive network in this location, to protect the Duchy of Brabant of which he was a vassal.

This large and beautiful late Roman style tower is in the open country and enjoys an unobstructed view of the fields.  The brick superstructure, consisting of four turrets and three tiered windows, was added around 1600.  A dungeon was accessed through the farm barnyard.  This was devastated by a fire in 1780 and rebuilt at the end of the 18th century and beginning of the 19th century.

A traditional Brabant farm, typical of the 18th century, the Moriensart farm is organized around a vast irregular court where a fountain flows.  The home, stables, cowsheds, sties, barns and plow shed extend as a quadrilateral at the foot of the dungeon.

A portion of the stables and its outbuildings were renovated into a reception hall and seminaries, while preserving the original framework and roofs.  This farm and its tower currently belong to the Gericke d’Herwijnen family.

The Tower has been inhabited since 1240 and is not open to the public.