Home » The City and its University » Entities 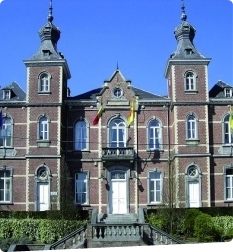 Introduction of the entities

Ottignies-Louvain-la-Neuve is made up of the ancient cities of Ottignies, Limelette and Céroux-Mousty.  Louvain-la-Neuve was added to these in the seventies, also giving its name to the city.

The current coat of arms depicts different heraldic signs evoking the old municipalities (Limelette and Céroux-Mousty) that merged with Ottignies in 1977, while incorporating the site of Louvain-la-Neuve.

Description of the Coat of Arms

Quartered, the first quadrant is gold with a blue fess (from Spangen for Ottignies and Mousty), the second quadrant has two blue corners separated by a gold stripe with each containing two detailed and beaked silver doves, the border of this quadrant has eight capital letter Ts (Coloma family for Céroux), in the third quadrant there is a gold cross that confines 4 identical seashells (arms of Anne-Josèphe de la Croix, abbess of Florival from 1733 to 1749 – these arms were built into a wall of the Biéreau Farm on the grounds that the university site is erected), the fourth quadrant is gold with 3 roosters (Limelette). This coat of arms was approved on December 18, 1991.

Ottignies-Louvain-la-Neuve is twinned with Jassans-Riottier (France), Veszprem (Hungary) and Tiassalé (Ivory Coast). It signed a friendship pact with Masaya (Nicaragua) and Draganesti (Romania).