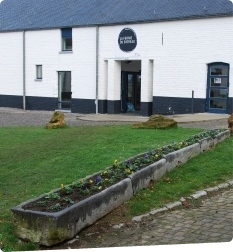 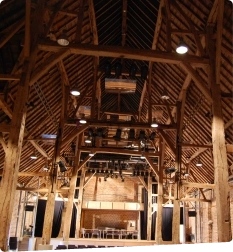 At the heart of the Biéreau district, the old 'Bierwart' Farm dominates the landscape.

The old Brabant farm, dating back to the 12th century, belonged to the Abbey of Florival, proprietor of the farm for more than 6 centuries. There is evidence that the Biéreau farm already existed in the 16th century under the name of Bierwart, which means “Beautiful View or Beautiful Air”, evoking the magnificent landscape that originally stretches out in front of the farm.

It is the oldest construction of the hamlet, and its large, quadrilateral enclosure is typical of large Brabant operations.

The brick and blue stone buildings of the farm are structured in an irregular manner around a large, central, rectangular court.
The barn, dated from the 18th century, has a half-timbering structure from the 16th century and its beams date back to the middle of the 16th
century.  The main body was rebuilt in the 18th century by the Abbess Anne Josèphe de la Croix. Her coat of arms is embedded in the façade.
On the back face, along the length of the Scavée of Biéreau, old pieces of a fortification wall of rough stone and sandstone are still visible.

The Biéreau farm was one of the rare buildings present on the Lauzelle plateau before UCL built its University.

The University, having acquired the entire land of the Lauzelle plateau at the beginning of the seventies, became owner of the Farm that was still inhabited and used until 1977.
The inhabitants were expropriated and the farm was transferred to the City, which carried out the renovations necessary for its transformation into a musical cultural center.

The Cultural Space of the Biéreau Farm, the house of music, was inaugurated in 2005. The splendid renovated and classified barn combines technical machinery with its over 300 year old framework.  This cultural center has a technologically up-to-date recording studio, which has hosted various regional groups like Ghinzu and the Girls in Hawaii.  Beyond its musical activities, the farm also opens its doors to literary events.