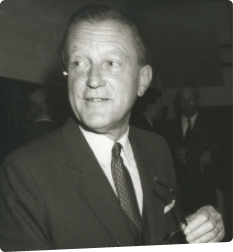 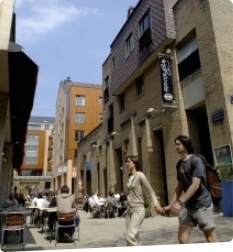 A dream that became reality

We owe the idea for the city’s design largely to Michel Woitrin, general trustee of UCL, and Professor Raymond Lemaire, specialist in ancient cities.


They wanted a site that respected the densely inhabited landscape, where urban functions mix and where the city itself promotes meetings and dialogue between students and non-students.

The history of Louvain-la-Neuve...

To guide the construction of the city, overall development plan and city-planning principals were established.  Two fundamental objectives were defined : university functionality and the quality of urban life.
These two objectives were broken down in 9 major commandments:

The heart of the city is build on a 12.6-hectare and 39-cm thick concrete slab.  It is on this concrete slab, wich covers public roads, parking lots and the train station, that the buildings were constructed.  All of the normal functions of a city can be found here: shops, administrative departments, cultural activities... everything mixes with the residential functions and with university activities.

The town was designed for all users in mind and is accessible to all at all levels. The train brings the commuters to the centre and regular bus connections leave from Louvain-la-Neuve to various destinations.

Each staircase is doubled up by a ramp or a lift to enable persons with limited mobility, pushchairs, elderly people, bikes, scooters, etc. to be able to circulate easily.

Special podotactile tiles have been laid on pavements for the visually impaired, or as paths on squares. A vast project to improve the public areas is in place and new achievements are attained each year.

Thanks to these initiatives the town of Ottignies-Louvain-la-Neuve was awarded the 2013 European EDEN for Destinations of Touristic Excellence for the theme “Tourism and accessibility”.

The goal to preserve green spaces and respect the environment influenced the overall design of Louvain-la-Neuve.  Examples, among others: respect of the landscape, deterring car use, a double draining network separating rain water from used water, use of natural gas for heating, cogeneration…
The natural spaces from the past, namely woods, planted slopes and paths, were preserved.

Sustainable development is a constant concern for Ottignies-Louvain-la-Neuve.  To create all aspects of the region (mobility, education, and health, for example) while taking into consideration energy, water, green spaces, sports and culture, the city implements projects that are compatible with sustainable development and environment preservation.


Specific locations in the city can be pointed out concerning this theme :

This precious heritage and its preservation are strictly linked to the participative management of all of the players in the region.  Residents, students, institutions and the university, enlivened by a collective and pioneer spirit, gave birth to the culture of the community decision, a shocking success and a model for sustainable development.